EER vs. IEER: The Difference One Letter Makes

Whether you’ve encountered the HVACR industry for 30 days or 30 years, you’ve likely come across many industry-related acronyms. While sentences may at first sound like a scrambled alphabet, they soon become the natural language used in daily conversations. In this blog, we’re demystifying the meaning behind two of the industry’s most frequently used acronyms, EER and IEER.

Within the HVACR industry, the terms EER and IEER are both used to indicate a system’s level of energy efficiency. Higher ratings equate to a more efficient unit. EER is short for Energy Efficiency Ratio, while IEER represents the Integrated Energy Efficiency Ratio. Put simply, the difference between the two acronyms lies in whether the ratio is integrated or not.

Let’s start with EER. The Energy Efficiency Ratio (EER) is a value showing the efficiency of a system at peak load capacity. It’s a good indicator of the system’s ability to produce a desirable environment, even on the hottest day. However, a full load only represents about 2% of a given unit’s operating hours in a normal comfort cooling application. Accordingly, while it’s useful to know, it can be misleading since it only accounts for a small fraction of the unit’s overall hours.

With this limitation in mind, the Integrated Energy Efficiency Ratio (IEER) was recently developed to address the actual efficiency of HVAC equipment that operates at different load levels. This ratio accounts for both full load and part load efficiencies. It does so by weighting EER values at different load capacities and adding them together. The IEER weightings in the formula are based on the approximate number of hours a unit spends at each load point throughout its life. As shown in the example below, the IEER encompasses EER ratings at four different load percentages. 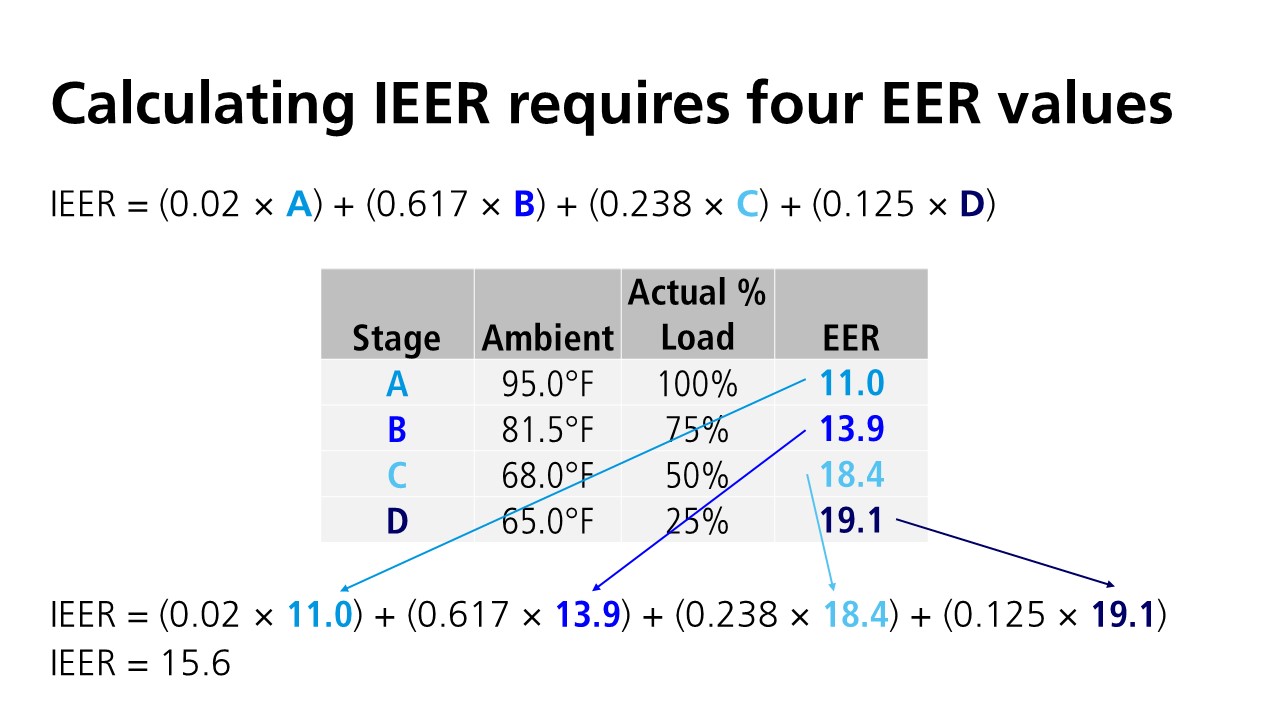 As you see in the formula above, most of the weight exists within the 75% and 50% part load points, which make up a combined 85.5% of operating hours. In other words, a unit spends most of its life working at part load. That’s why technologies that enhance part load performance, like modulating condenser fan control,  Variable Volume Ratio (VVR) compression, and variable speed compressors, are so vital. Additionally, part load energy efficiencies are of greater importance given that the U.S. Department of Energy has replaced EER with IEER in the new efficiency standards.

Fortunately, most people don’t have to calculate these efficiency ratios on the daily. So, if you forget the formula, just remember that EER is calculated at a single load capacity, whereas IEER integrates many different load capacities. There you have it – you’re now two acronyms closer to fully understanding the HVACR industry lingo!